If You’re Invited to a Death Dinner, What Should You Bring? 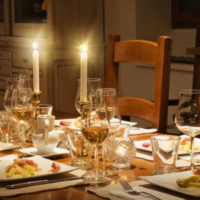 The concept of “Death Dinners” is a growing trend gaining momentum nationwide. Talking about death over dinner may not seem appetizing, but this idea came about because so many people avoid talking about the most unpleasant and certain event in life – and avoiding estate planning can cause chaos among surviving family members when someone dies. There are organizers, both volunteer and for profit, facilitating gatherings where family members discuss their desires and concerns surrounding the end of life.

Survey results confirm that as nation, we fail to properly confront and prepare for death and the end-stage conditions that are often much harder on loved ones than death. This avoidance factor is understandable. Recently, an elderly mother’s resistance to this discussion inspired the title of her daughter’s memoir called “Can’t We Talk About Something More Pleasant?” According to the Pew Research Center, about 70% of people lack a living will. Only 20-30% of people die at home while 70% desire this outcome rather than dying in a facility. It’s understandable that people to avoid and put off the scary and disturbing prospect of death, which leads so many people to fail to prepare for the inevitable. Though we can easily pay lip service to ideas such as “death is part of life,” planning advocates like death dinner organizers will likely need to continue working diligently to get the attention of the majority of the public.

Oddly, the town of La Crosse, WI boasts the astounding distinction of 96% of its residents having advanced healthcare directives. This is a document delegating a loved one the authority to make healthcare decisions on behalf of an incapacitated patient. The credit for this remarkable rate goes to an influential local hospital official who has educated the community about why advances healthcare planning is so critical. You may remember the Terri Schiavo case here in Florida where a woman in an irreversible persistent vegetative state was the subject of a 15 year legal battle between her parents and her surviving spouse over who was entitled to “pull the plug”. Her feeding tube was eventually disconnected after exhaustive court appeals. If she had had a simple 1-page Living Will which directed her wishes in the event that she ended up in that condition, years of court battles would have been completely unnecessary.

There is no shortage of cautionary tales stemming from failures to plan. At our law firm, we have counseled several families suffering when their deceased relative’s didn’t have an estate plan when they died. In one case, a husband died suddenly without a will and without ever having added his wife to the deed of the marital home he purchased before the marriage. After having lived in the home for several years and contributing to its maintenance, the widow must now sell the home and share the proceeds with her late husband’s daughter from a prior marriage. We can’t be completely certain of his intentions, but there is much evidence indicating he wanted his wife to inherit the home they shared, rather than the eventual legal outcome, including a writing he signed that does not constitute a valid will and is irrelevant for all intents and purposes.

In another case, a senior Alzheimer’s victim could have delegated to his wife the right to manage his affairs through a power of attorney while he remained competent. Following the onset of dementia and complete lack of capacity to knowingly sign such a directive, the family must resort to an expensive and lengthy legal guardianship action. I could go on for pages.

At Barrister Law Firm, we urge all families to confront the reality of death and serious disability while its members remain alive and healthy, even if it takes a Death Dinner to accomplish this important task. Oh, and for your Death Dinner be sure to bring all of the legal names, addresses and contact information for anyone you want to include in your estate plan. We welcome feedback from our clients and the public as to how we can help spread the gospel of preparation and add value to this important discussion.

By Matt DeBoard | Posted on June 24, 2017
« Pro Tip: When One of Your Favorites Announces a Tour, Don’t Wait Around for Tickets. Prices Will Be Brutal!
Law Hopes to Prevent Child Deaths in Hot Cars »

GET YOUR FREE CONSULTATION

Skip footer and go back to main navigation